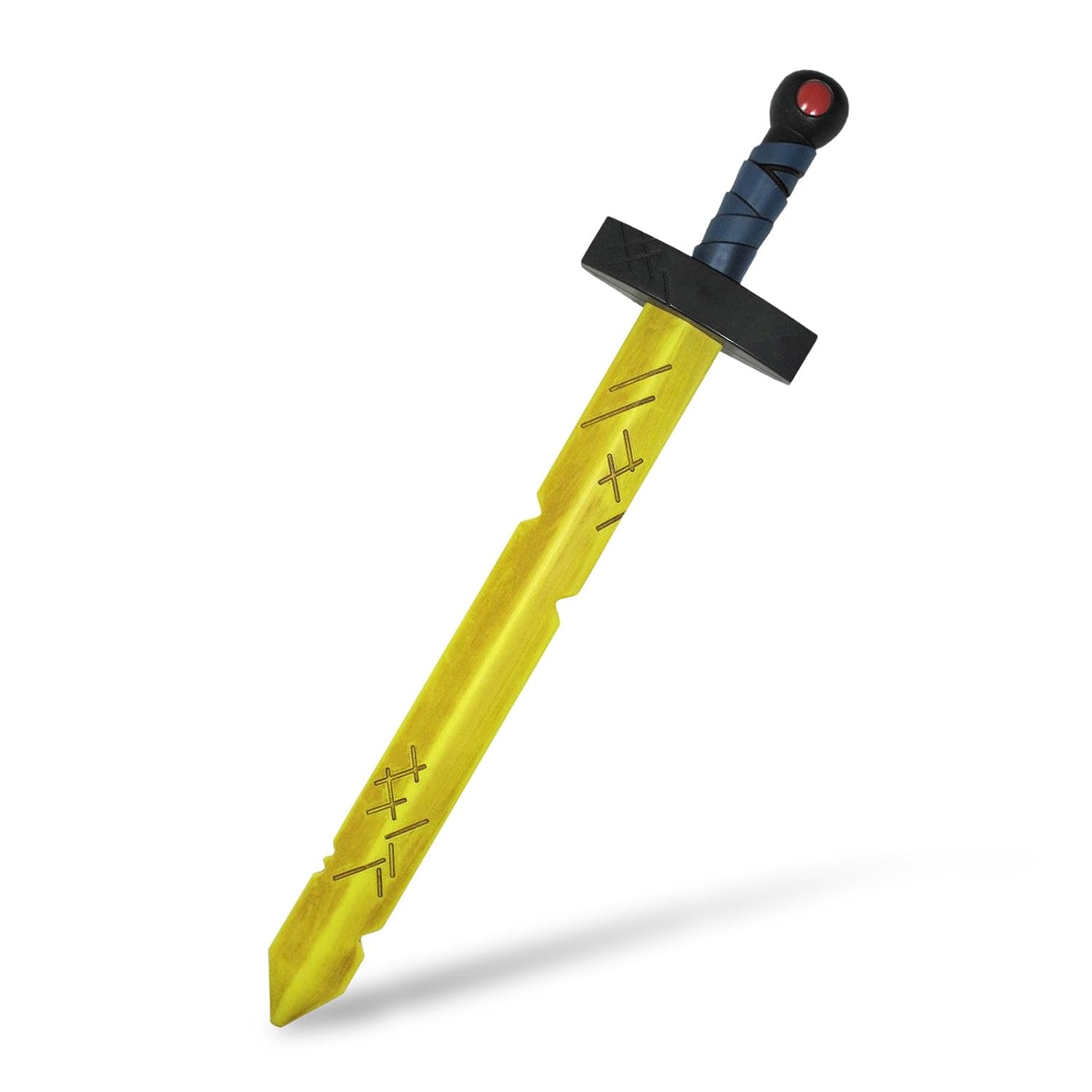 We'll go ahead of ourselves and assume that you're here because your husband or boyfriend asks an Adventure Time Sword replica for his birthday gift?

You have come to the right place because we found the replica of Finn's golden sword of battle, also known as the Scarlet. The sword is the weapon that Finn used in Adventure Time season one and two.

Just like what you see in the show, this Adventure Time sword replica has a dented blade. The whole of the edge is chipped and dirty as well.

The handle of this sword has some worn leather grip-straps just like in the series. It is even complete with that red gemstone right at the center of the handle.

If you're someone not familiar with the show Adventure Time, you're probably asking now why would a grown-up man asked this for a birthday gift.

You have to hear out your man. Adventure Time is hilarious and heart-warming at the same time. At some point, it even wrenches the hearts.

Adventure Time is about Finn and his best friend Jake the Dog. Jake has magical powers and can contort his body in virtually any size. He can also shape-shift and change his size.

As we all know, a boy and a dog in one show make for the perfect formula that could tug the heartstrings. This friendship is very much true in Adventure Time when Finn and Jake have to deal with loss, all kinds of emotional damage, including memory loss.

The characters in the show even have to undergo heartbreaks. From literally how it is in a relationship to how to move on from break-ups. The show also deals with how one should have the courage to deal with things that threaten your being, your friends, and your family.

And just when you thought that it's real life, let me tell you that this show also has vampires and talking hearts.  And, all those crazy things and wild feelings presented with a great deal of humor and perfect comedic timing.

The Adventure Time is for children, supposedly, but any watching adult will know that it is a trippy show, hence, the loyal following of immense grown-up fans.

Now, with all those things said, will you still ask why your adult husband would want this Adventure Time sword replica for a birthday gift?

This Adventure Time sword replica has worn leather grip-straps like in the series. It is even complete with that red gemstone right at the center of the handle.
Check Price on Amazon.com

Wait, is there a Star Wars fan on your gift list this year? Han Solo in carbonite costume would sure make an unusual and unforgettable gift!

Labyrinth Door Knockers For the Mysterious You

Don't be boring and take your taste to the next level with these labyrinth door knockers. Door knockers are the first things your guests see and touch!

I am Groot! (Translation: Get this costume NOW!)

A helmet based on one of the most iconic designs in science fiction, the Predator. What else do you need to convince yourself, really? Get one today!

The Disney officially licensed Ursula costume is sure to win the admiration of your Halloween guests this year. No more boring costumes!

Who doesn't want to live in Middle-earth? If you are the world's biggest Lord of the Rings fan, you've got two options: sneak into New Zealand and try to find a hobbit hole that hasn't been discovered yet, or settle for these Hobbit Feet Slippers.

Elephant plush for children and adults

Looking for an excellent gift for children of all ages, an exceptional company, or unique home decoration? This fluffy elephant plush will top your list!

Sub Zero Mask. No, seriously, this thing is cool.

Minecraft torch to Illuminate your quest for survival

We found an assortment of Star Trek polos that the fandom will surely love. There are t-shirt and uniforms too. Many are officially licensed Star Trek products.

The vertical ice cube tray is strategic in many ways. It saves space inside the fridge and produces hexagon-shaped ice films that are easy to crash in blenders.

The Oreo dunking spoon prevents kids from dipping their hands into the glass of milk when they eat cookie. There won’t be sticky fingers and stained shirts too.